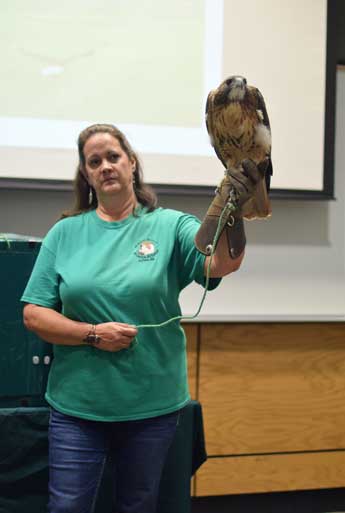 Paul and his volunteer Tina Miller brought live birds including a vulture, great horned owl, red-tailed hawk, peregrine falcon,and a barn owl. He discussed how the facility cares for and releases injured birds of prey and shared how each of the visiting birds were brought to the facility. Paul works full time in the aerospace industry and says volunteers play a large role in the organization.

RRCA is the largest facility of its kind in Arkansas and one of only three that is allowed to take in bald eagles and golden eagles. They work closely with the Arkansas Game and Fish Commission recovering various birds of prey. RRCA has successfully released over 1200 birds of prey back to their natural habitat.

RRCA began in 2003 with a mission to provide quality care and rehabilitation for ill, injured or orphaned birds of prey with the goal of their release back into the wild. RRCA holds a raptor rehabilitation and education license from the United States Fish and Wildlife Services. Their facility has over 3000 square feet of flight pens that are built to very strict specifications.