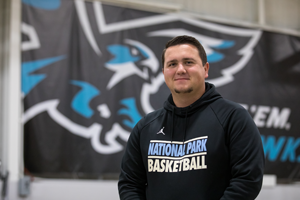 After a delayed start to the 2020-2021 men’s basketball season due to COVID-19, the Nighthawk men take the floor for the first time this year with aspirations to go farther than ever before.

Among a slew of new faces with the program is men’s assistant basketball coach Jacob Leonard.

A graduate of Flippin High School, Leonard earned his bachelor’s degree in Physical Education at the University of Arkansas, where he served for three years as a student manager under Mike Anderson and, one year later, a graduate manager under Eric Musselman—experience that the coach says was invaluable. “It was great to see how a Division I program was ran and being around guys who will play in the NBA one day,” Leonard said. “I made a lot of great connections and I learned a lot that will help me grow in my coaching career.”

In September, one phone call changed everything. Soon, the aspiring coach was packing his bags for the Spa City.

“Coach Hargrove called me and invited me to come to Hot Springs and be his assistant coach,” Leonard said. “He and I went to school together at Flippin and have stayed in touch over the years. I played basketball for his dad and that’s where I really fell in love with the game. I was substitute teaching at the time—trying to complete my degree, and I couldn’t say no to the opportunity to be back around the game of basketball.”

As the newest member of Nighthawk Nation, Leonard was quickly impressed by the team’s talent.

“I’m really excited to be a Nighthawk,” Leonard said. “We have a bunch of guys who can shoot the ball, make crazy plays and bring high energy,” Leonard said. “Coach Hargrove did a great job recruiting. These guys know how to win games. Offensively, they’re as talented as any team I’ve seen. If we can get them to buy in with the same intensity on defense, we’re going to be really fun to watch this year. I’m excited to work with Coach Hargrove and I’m excited to be a Nighthawk.” This season, Leonard is tasked with galvanizing the Nighthawks’ defense.

“Coach Hargrove brought me in to focus on instilling new defensive techniques for our guys,” Leonard said. “I paid close attention to how Coach Musselman ran his

defense last year at Arkansas. This year, we’ll be trying to implement things that the Razorbacks do to get stops on the defensive end, which will lead to buckets in transition.”

As National Park College prepares for its home opener Tuesday versus Central Baptist College, Leonard is confident that the Nighthawks are ready to earn their first win.

“Coach Hargrove brings the energy,” Leonard said. “He’s really smart and understands where our guys are supposed to be on offense and knows how to break down opposing defenses. We’ve been preparing for our first game for a very long time. We’ve sat down and watched film nonstop. We’re going to try to play up-and-down clean basketball and play harder than our opponent.”

In addition to coaching, Leonard continues to pursue his master’s degree in Sports Management.

“I only have six hours left,” Leonard said. “While I’m on the court coaching the Nighthawks, I’ll also be finishing my degree online this spring. As for what’s next after that—it’s anyone’s guess. Coaching this level of competition will not only teach me how to coach and build relationships, but also recruit. I’m excited to be here and to learn as much as I can.”

In his free time, Leonard enjoys exploring the outdoors of Hot Springs.

“Hot Springs is a cool city,” Leonard said. “I haven’t spent much time here before this, but I’ve really enjoyed it so far. Coach Hargrove and I have been playing golf at Lakeside Country Club and he has been showing me all the cool restaurants. I like to check out downtown and hang out at the lake with friends.”

From Flippin to Fayetteville and now to Hot Springs, Leonard is excited for his next chapter to officially begin.

“In order to get what you want, you have to be willing to do what other people won’t,” Leonard said. “At Arkansas, being a manager meant I was at the bottom of the totem pole. I was mopping, doing laundry, filling Gatorade bottles—I even had to go get someone a sock when their sock ripped during a game. If you’re willing to do what someone else won’t, it will get you further than you think. Build connections with people, be genuine and never stop learning the game. Who knows? You might get a call asking to be someone’s assistant coach one day.”