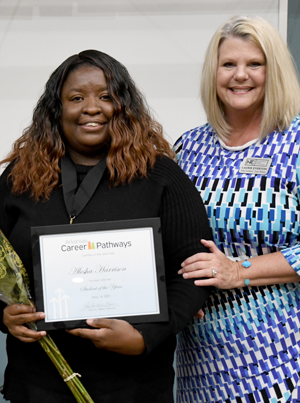 National Park College (NPC) student Alesha Harrison, was recently named student of the year for the Career Pathways Initiative (CPI) at NPC. Harrison was recognized at the annual CPI graduate recognition ceremony, which was held May 14.

In hopes to become the first person in her family to graduate college, Harrison enrolled at NPC to pursue her education. As a single mother with three children at home, she realized the pressure of balancing family and schoolwork. Her mentor introduced her to the CPI program and she decided to contact them.

CPI intake coordinator Laurie Everton said, “CPI’s goal is to assist low-income parents in becoming self-sufficient. We try to eliminate financial burdens by partnering with our students on their educational journey. CPI can step in to offer childcare, transportation assistance, books, tuition, and fees and course related supplies.”

In July of 2020, with just a few months until graduation, tragedy struck when Harrison received news that her daughter had been killed. Harrison took on the responsibility of raising her grandson while finishing her final semester. She said the support she received from CPI was invaluable.

“Career Pathways was one of the main reasons for my success story. They provided me with everything I needed from school supplies to moral support, especially on the days when things got rough. They kept me encouraged so I could finish strong,” said Harrison.

“NPC is more than just a college, it was more like a family-oriented environment filled with amazing instructors and staff,” said Harrison.

“It was an absolute pleasure to work with Alesha and watch her achieve her goals. There is no greater joy than to see someone who has walked through a storm and come out stronger on the other side. Director Harris and I could not be prouder of Alesha. She will always be a part of our CPI family,” said Everton.

Harrison added, “Being named Career Pathways Student of the Year inspired me by assuring me that throughout all of the struggles I encountered, my labor and perseverance was not in vain and in the end, all of my hard work did not go unnoticed.”