The National Park College (NPC) Nighthawk men’s and women’s basketball teams celebrated homecoming over the weekend, with the Nighthawk women defeating ASU Mid-South, 65-61 and the Nighthawk men falling to the Greyhounds, 83-69, Saturday. 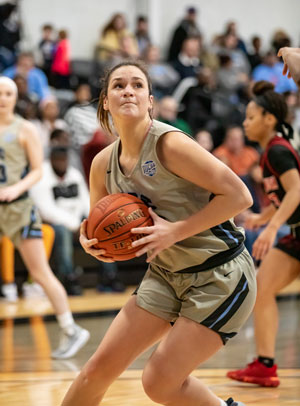 After falling behind, 6-0, to start the game, the Nighthawk women (5-4) utilized a strong defensive press to keep the game within one score by the end of the first quarter, 11-8. Led by freshman Nya Moody (Lake Hamilton) and sophomore Grace Crawford (South Side Bee Branch), NPC caught fire in the second quarter, outscoring the Lady Greyhounds, 22-14, to take a 30-25 lead into the halftime break.

Shooting just 2-10 from the free throw line in the first half, the Nighthawks flourished from the charity stripe in the third quarter, with Crawford and freshman Imani Honey (Hot Springs) padding NPC’s lead on 9-9 shooting. Leading, 53-40, heading into the fourth quarter, ASU Mid-South would stage a late comeback, shrinking a 15-point deficit down to just three points. Key free throws and a three-pointer from Crawford would help the Nighthawk women seal their second-consecutive NJCAA Region II Division II conference victory.

Crawford led the Nighthawks in scoring with 19 points, while Honey and Moody added 16 points apiece in the win.

In men’s action, No. 19-ranked and reigning NJCAA Region II Division II champions ASU Mid-South knocked down a couple of three-pointers to take an 11-8 lead with 16:27 remaining in the first half. Aggressive shooting from sophomore Reyhan Cobb (Decatur, Ga.) kept the Nighthawks (6-5) in contention, tying the game at 18 with 10:58 remaining in the half. In his Nighthawk debut, sophomore KaJuan Christon (Hot Springs) led National Park College with 11 first-half points to pull NPC within four points at the break, 39-35.

In the second half, the Nighthawks traded blows with ASU Mid-South, but ultimately couldn’t maintain the pace. 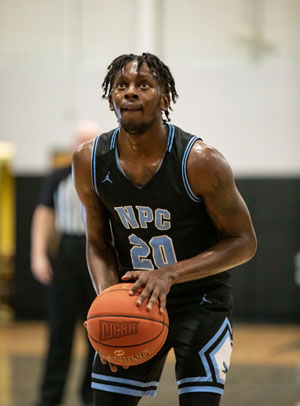 With NPC trailing, 51-47, at the 15:30 mark, the Greyhounds erupted on a 6-0 run, pushing the lead to double digits and never looking back. Nine-point second-half efforts from Christon and freshman Joe Ramey (El Dorado) wouldn’t be enough as the Nighthawks ended their five-game winning streak with their lowest point total of the season.

“I really thought we were ready,” Nighthawk head coach Jason Hudnell said. “I felt good about our week of practice. I liked where we were at halftime and I felt like we were in good shape. They just hit some shots. They make shots and that’s why they’re ranked where they are. We weren’t able to make a big shot when we needed to, and they were. But we’re going to be ok. We talked to our men and we’re going to see those guys again. We see them again at their place and I have a sneaky feeling that we’ll see them again in the regional tournament.”

Christon led the Nighthawks in scoring with 20 points. Ramey and Cobb scored 15 and 13 points, respectively, while freshmen Terry Clardy Jr. (Conway) added 10 points in the loss.