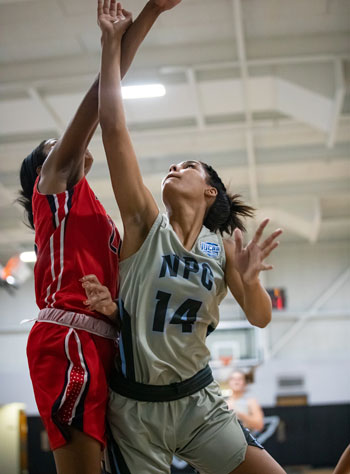 After falling behind early, 12-3, in the game’s opening minutes, NPC was forced to play catch-up throughout the first quarter. Paced by seven points from freshman Nya Moody (Lake Hamilton), the Nighthawks kept within reach of the Patriots. Sophomore Grace Crawford (Bee Branch) gave the Nighthawks their first lead with 52 seconds remaining in the first quarter.

With NPC trailing, 21-20, entering the second quarter, the Patriots took advantage of two Nighthawk injuries to pad their lead, extending their lead to 48-38 at halftime.

In the final frame, Moody stepped up, providing 11 of the Nighthawks’ 31 fourth-quarter points to help erase the deficit. With less than a minute remaining in the game, a clutch three-pointer from Moody put the Nighthawks back on top, 81-80, sparking a 10-3 run to propel NPC to its second-consecutive victory and its biggest in program history.