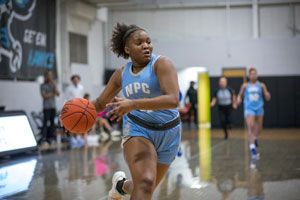 The National Park College (NPC) Nighthawks men’s and women’s basketball teams swept their games against Shorter College Monday, with the Nighthawk women defeating the Lady Bulldogs, 95-91, and the Nighthawk men picking up a 115-83 win.

With 3:37 remaining in the first quarter, sophomore guard India Atkins (Bryant), NPC’s all-time leading scorer, eclipsed 700 career points on a reverse layup to give the Nighthawks a 13-5 lead. Despite a slight rally from the Lady Bulldogs, NPC kept its foot on the gas, leading 23-17 at the end of the quarter.

Shorter College rallied in the second quarter, chipping in 10 free throws to outscore the Nighthawks, 27-24. Atkins led the offense for NPC, amassing 15 points, including six free throws, to keep NPC in front, 47-44 at halftime.

In the second half, NPC received an offensive and defensive spark from freshman guard Janayi Baker (Magnolia). Fueled by nine third-quarter points from Baker, NPC managed to match the Lady Bulldogs bucket for bucket to take a 72-69 lead into the fourth quarter. In the final act, Baker shined, delivering five points to stave off a late Shorter College rally and propel NPC to its second-consecutive NJCAA Region II victory.

Atkins led the Nighthawks in scoring with 26 points, while Townsend and Baker finished with 21 and 18 points, respectively, in the win. 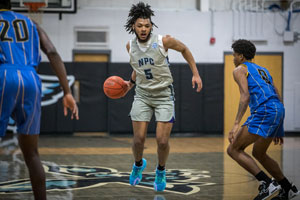 three-and-a-half minutes. Responding with a run of their own, the Bulldogs rallied for 10 consecutive points to make it a one score game, 14-12, with 15 minutes remaining. Led by strong scoring from freshman guard Patrick Punch (Houston, Texas), the Nighthawks rebuilt a double digit lead, 28-17, with 9:06 to play—a lead that would not be relinquished for the remainder of the period. Paced by timely three-point shooting from freshman guard Nakavieon White (Odessa, Texas), NPC sailed into halftime with a 52-41 advantage.

With 15 second-half points, sophomore forward Quinntez Grimes (Dallas, TX) jump-started NPC’s offense quickly and never looked back. Building the lead to 30 points, 101-71, seven minutes into the half, the Nighthawks survived nine second-half Bulldog three-pointers down the stretch to notch their second NJCAA Region II victory of the season.

Nighthawks basketball will host a health care and first responder appreciation night Thursday, January 19 in the Kettle at NPC. The Nighthawk women play host to North Arkansas College at 5:30 p.m. followed by the men at 7:30 p.m. Both games will be streamed live on the Nighthawk Network. Each honored health care and first responder will receive two tickets to the game and will be recognized during halftime of each game. Additional tickets can be purchased at the door for $5. Tickets and concession are cash only at this time.