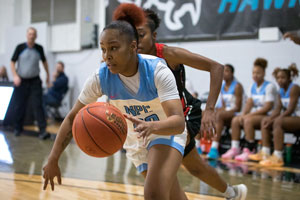 Led by seven first-quarter points from sophomore guard India Atkins (Bryant), the Nighthawk women (6-7) found their groove early, outscoring the Lady Colts, 20-13 in the opening act while forcing tough shots with a tight defensive press. Adding seven points in the second quarter, Atkins and the Nighthawks continued to give UA Cossatot fits, defensively, resulting in a 38-30 advantage at halftime.

Atkins fueled the Nighthawks in the second half, adding 10 third-quarter points, including a 60-foot buzzer-beating trey to end the quarter. Leading, 62-51, entering the final 10 minutes, sophomore guard Amaya Coakley (Killeen, Texas) stepped up with six fourth-quarter points and a strong defensive presence to help NPC slam the door on its first NJCAA Region II win of the season.

Atkins led the Nighthawks in scoring with 26 points, while Coakley finished with 19 points in the win.

After falling behind, 12-6, in the first four-and-a-half minutes in men’s action, NPC (11-5) rallied behind strong scoring efforts from freshman Nakavieon White (Odessa, Texas) and sophomore guard Justin Davis (Waterbury, Connecticut) to keep pace with the Colts’ hot three-point shooting. Despite trailing for the majority of the first 20 minutes, the Nighthawks took the lead in the final minute of the half on Davis’ fourth triple, sliding into halftime with a 42-40 advantage.

Both teams remained neck and neck throughout the first seven minutes of the second half, with UA Cossatot matching NPC bucket for 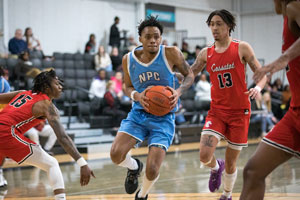 bucket. NPC took the lead for good with 12:20 remaining on a layup from White in double coverage. Freshman guard Patrick Punch (Houston, Texas) guided NPC to the finish line with 18 second-half points and a perfect nine-of-nine from the free throw line to seal NPC’s first NJCAA Region II victory of the season.

Davis led the Nighthawks in scoring with 21 points, while Punch and White finished with 20 points apiece in the win.

Nighthawks basketball will host a health care and first responder appreciation night Thursday, January 19 in the Kettle at NPC. The Nighthawk women play host to North Arkansas College at 5:30 p.m. followed by the men at 7:30 p.m. Both games will be streamed live on the Nighthawk Network. Each honored health care and first responder will receive two tickets to the game and will be recognized during halftime of each game. Additional tickets can be purchased at the door for $5. Tickets and concession are cash only at this time.