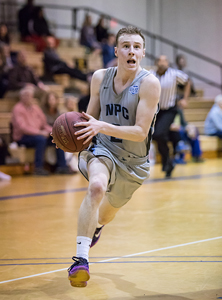 As an inaugural member of the National Park College (NPC) Nighthawks men’s basketball team, Seth Duke helped lay the groundwork for where the program is today. After graduation, Duke embarked on a journey where he would not only find success at the next level, but also find himself.

“The summer after graduating from NPC, I had multiple offers to play college basketball,” Duke said. “By the beginning of August, I had narrowed my choice down between two schools and knew that I needed to make a decision quickly. One of those schools was the top-ranked NAIA school in the country. I called that coach at 7 p.m. one night and didn’t get an answer. The next morning, [University of the Ozarks Coach Travis Carruthers] gave me a call and told me to get to Clarksville and make something happen. I felt wanted. That’s when I knew where I belonged. I was one missed phone call from not going to Clarksville and I’m thankful that things played out the way they did.”

As an Eagle, Duke quickly learned how difficult playing NCAA Division III basketball could be.

“In my first year, we had a lot of talent, but lacked chemistry as a team,” Duke said. “That season, I came in off the bench and we finished below .500. It was my first losing season I’ve had in a long time.”

Disappointed, but not discouraged, Duke dug back in—determined to make a difference in his senior season.

“My senior season was challenging,” Duke said. “We brought in some new faces and were struggling with getting them acclimated while also dealing with cancellations due to COVID-19. One we got to conference play, however, we locked in, hitting a big winning streak and earning the right to host the American 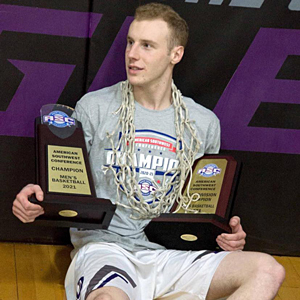 In the postseason, Duke and the high-flying Eagles soared, capping a historic season with the university’s first ASC championship by defeating Louisiana College, 74-72.

“With home court advantage throughout the playoffs, we were pumped,” Duke said. “Our gym was packed every night and the atmosphere in the championship game was insane. We were clinging to a two-point lead with less than two seconds left when our opponent missed a wide-open layup and the rest was history.”

With a championship in tow, years of hard work had paid off for Duke. Feeling validated, the senior knew it was the right time to call it a career.

“My body was starting to break down on me,” Duke said. “I was in the hot tub before games and in the ice tub after games. I did have teams from Germany and Israel offer me the opportunity to play overseas, but being far from home with no friends wasn’t appealing to me. I decided that it was time to hang it up and move forward into the next phase of my career.”

Duke graduated from the University of the Ozarks in 2021 with a bachelor’s degree in education with his sights set on approaching the game he loved from a different angle—coaching.

“When I was at the University of the Ozarks, I also worked as a student intern for Clarksville High School’s basketball program,” Duke said. “I’ve always loved mentoring kids and being able to send my love for basketball to the next generation. Being in the classroom teaching kids how to be successful in their lives felt right to me and I knew it’s where I belonged going forward.” 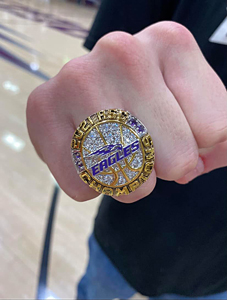 Earlier this year, Duke served as an assistant baseball and basketball coach at Lincoln High School. This fall, his journey comes full circle as the former Gravette Lion returns to the halls he once called home to teach science and become the school’s head eighth grade basketball coach while also serving as the assistant junior high and senior high boys’ basketball coach.

“I’m excited to be back home at Gravette,” Duke said. “I was offered a couple of different coaching jobs, but I went with the school that I felt I could learn the most from. I’ve always looked up to coach Matt Busch and believe that he will be a great mentor to show me the ropes of coaching. It’s going to be a fun and exciting year for us.”

To date, Duke remains NPC’s career leader in assists per game (4.1), stands second all-time in assists (99) and is in the top 10 all-time in steals (28) for the Nighthawks. His most memorable performance came in a 98-84 win over against Central Baptist College’s junior varsity team on February 26, 2019, where the point guard amassed 25 points and 10 assists. Combined with strong performances from former teammates Braylon Steen and KJ Corder, it remains the only game in NPC men’s basketball history where three players recorded double-doubles.

“NPC made me into 10 times the basketball player I was before I got there,” Duke said. “Being around coaches and players who loved the game and genuinely wanted me to succeed made me want to work harder. Being able to say I was one of the first members of that program makes me proud. Without NPC, I would have never won a championship at University of the Ozarks. Without my time as a Nighthawk, I wouldn’t be the man that I am today.”