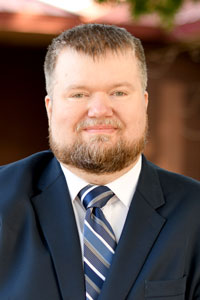 Before he was National Park College’s (NPC) accounting controller, Andrew Pennington was a teenager searching to survive in a world filled with adversity.

“In high school, I was bullied terribly,” Pennington said. “I started skipping school and eventually dropped out. When I was 16 years old, I got my GED at the adult education center in Malvern and enrolled at Ouachita Technical College to study information technology.”

Pennington’s first journey into higher education was short lived, however, and he was quickly thrusted into the workforce to take care of himself. In 2008, fatherhood arrived, which motivated him to seek a better future for his new family.

“I was working in a dead-end job with no future,” Pennington said. “I was laid off and unemployed with a six-month-old child. I was at a point where I didn’t know what to do, but I knew that I had to do something.”

Looking for an answer, Pennington found hope in an unlikely place.

“I was trying to find a job through the unemployment office and someone there recommended that I go back to school,” Pennington said. “I started researching different career paths and found that accounting graduates had a high percentage of landing a job after college. I knew that I was decent with numbers and decided to give it a try.”

Pennington enrolled at NPC and quickly fell in love with the program.

“I remember taking my first accounting class with Jennifer Lyons,” Pennington said. “It was great. She was relatively new at the time, but she played a big part in my love for accounting. After that class, I ended up tutoring others in Accounting I and eventually tutored in Accounting II, too. Everything felt natural to me.”

In 2011, Pennington became the first in his family to graduate college when he received his associate degree from NPC.

“When I walked across that stage, I didn’t think of it as a milestone,” Pennington said. “I was focused on whatever I had to do next to keep moving forward and provide for me and my family so that when my children get older, they can follow in my footsteps and graduate too.”

Determined to further his education, Pennington entered the online Bachelor of Science in accounting program at the University of Arkansas Little Rock (UALR). Although juggling school and work was not easy, he never gave up on his goals.

“UALR’s program was great because I could do it at my own pace,” Pennington said. “I was working at Magic Springs at the time and although there were many late nights involved, I’m proud that I stayed dedicated and made the time to get it done.” Pennington graduated with a Bachelor of Science in Accounting in 2015. Putting his skills to work, his journey took him from Hot Springs to North Little Rock.

“After my time at Magic Springs, I started my own business doing bookkeeping for businesses on the side,” Pennington said. “Using my IT experience, I started buying tax-related domain names and making webpages. I also spent some time as the finance manager for the Garland County Sheriff’s Office before moving to North Little Rock to do accounting for a real estate development business.”

In June, Pennington became NPC’s newest accounting controller—an opportunity that allowed his family the opportunity to move closer to home.

“My family and I really missed being in Hot Springs,” Pennington said. “When we saw this opportunity, we were both very excited.”

Constantly thrown into different environments from a young age, Pennington had to grow up quickly. No matter what life threw at him, however, the father of three never lost sight of his goals.

“Don’t ever be afraid to struggle,” Pennington said. “Struggling means you’re trying to get to a better place. The secret is to stay motivated. The best thing you can do is get a combination of education and experience. Make goals, complete them and keep making more.”