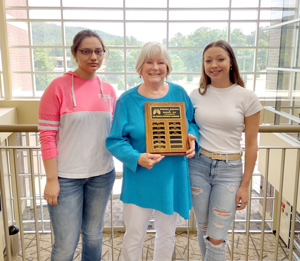 A Little Rock native, Clark began the respiratory therapy program at NPC to learn how to care for an ill family member. “I started the program with a very sick mom with end-stage COPD,” Clark said. “NPC’s hours were more convenient for me to be able to be by my mom’s side at the hospital as well as be in school, too.”

Clark lost her mother earlier this year. Inspired by her journey, Clark plans to continue her quest to help others in her memory. “Receiving this scholarship means a lot to me,” Clark said. “I don’t accept any loans or tuition and I pay for everything out of pocket. This helps me so much. After NPC, I plan to pursue my bachelor’s degree online through the University of Arkansas for Medical Sciences (UAMS) and explore other hospitals in different states.”

A Lake Hamilton High School graduate, Cofar chose NPC because it is close to home. “My grandmother inspired me to follow this path,” Cofar said. “She had COPD and I was very impressed by the respiratory therapists that were by her side caring for her. The respiratory therapy program at NPC allowed me to be closer to home so I could spend more time with my grandmother and my family.”

After NPC, Cofar plans to continue her education to become a geriatric respiratory therapist. “Receiving this scholarship means a lot to me because I can now pay off my tuition without using up all of my current scholarships,” Cofar said. “After NPC, I want to get my bachelor’s degree at UAMS while working part time to grow my skill sets.”

“Both Taylor and Amy are personable and articulate with positive attitudes about the career path they have chosen,” Lawrence Respiratory Foundation Chair Gretchen Lawrence said. “Both know what their role will be in the healthcare setting, not only because of having clinicals as part of their curriculum, but also because they have had friends and family members with lung conditions that were serious enough to bring them to the hospital for care.”