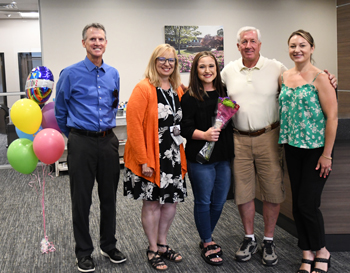 Graves was notified Friday during a surprise announcement on campus. Lloyd Robertson, owner of Lloyd’s Auto Sales surprised Graves with the award. He said Graves’ application had all the right components and praised her for her perseverance. “It had compassion because we know you want to help people and commitment is huge.”

Graves said, “I am just thankful for the opportunity to have a second chance and thank you to all of you for helping me along the way.”

Graves enrolled at NPC in 2015 but was not able to complete her education. In 2017, she and her husband welcomed their first child followed by their second in 2021. Though she juggles the roles of being a wife, mother and a full-time employee, Graves felt that it was time to return to school.

Driven by her giving and empathic nature, Graves knew she wanted a career in a field that she could give back to people and be their advocate. She knew the medical field needed people who were like her. “I believe that every patient deserves to have people on their team that will not only provide the utmost care, but also strive to have a one-on-one relationship with them as their care provider,” noted Graves.

She also wants to set an example for her children. “I want both of my children to know that no matter what obstacles life throws at you, or what diversities you face, there is and always will be a way - if you fight for it,” said Graves. “I’m just thankful for the opportunity to have a second chance.”

The Lloyd's Second Chance Scholarship is available to students who need a second chance at earning an education thanks to the generosity of Lloyd's Auto Sales and National Park College and in partnership with US Stations. The scholarship covers full tuition and fees for two years.