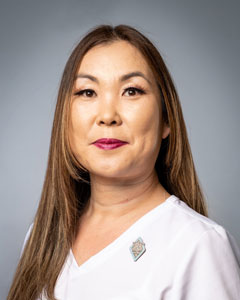 Each year a student is selected who embodies the true spirit of the TRIO program, is doing well academically and uses the resources provided to them through the program.

TRIO Student Support Services program coordinator Suzanne Hendrix said, “This year’s TRIO student of the year has overcome many obstacles to get here.”

Winchell moved to the United States with her parents and brother at the age of 18 and became a U.S. citizen. When her husband of 20 years became ill in 2012 with Chronic Crohn’s disease, she also discovered that both her father and husband had cancer. She made the choice to stay home and become a caregiver. During this time, she began thinking about nursing school.

Now at the age of 43, Winchell has decided to fulfill her dream of becoming a nurse. She has a disabled husband and four children, two of whom still live at home. “At this time in my life, I know exactly what I want and how to achieve it. I am willing to put in as much time and effort as is required of me,” she said.

Winchell is a stellar student, but it has not come easily. She said she has had many moments of fear and doubt, spent long hours studying, creating study groups and finding creative ways to learn. She took advantage of campus support services when she recognized she needed help. “Even with so many great TRIO students, Jinny stood out. We didn’t have to go beyond the fact that this student has spent 79 hours receiving tutoring in the Academic Success Center. That speaks about her willingness to succeed,” noted Hendrix. Despite her obstacles, Winchell has remained focused on the goal of graduating and starting a career in nursing to help support her family.