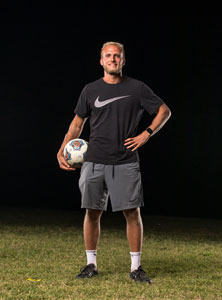 “We are very fortunate to have a quality soccer coach already on our staff in Coach Gartner,” NPC Athletic Director Jason Hudnell said. “It was an easy choice for me to move Coach Gartner into the interim head coach position. He has been with us during our inaugural year, he has played the sport at the collegiate level, and he was instrumental in recruiting many of these student-athletes to NPC. I am confident that Coach Gartner and NPC soccer will make significant strides this fall.”

“I cannot be more excited to work with both teams for our second season together,” Gartner said. “I am humbled by the opportunity to continue to work with our men and women in the town that I was born and raised in. I am very much looking forward to the progress National Park College soccer will make and the hard work we will be contributing to make it a reality.”

“I am happy for Coach Tello and the opportunity that he has been given to go coach at the NCAA Division I level,” Hudnell said. “It is a testament to his hard work, skill level, and knowledge of the game. As an athletic director, I want to hire coaches that have high ambitions and who are not afraid of a challenge. We have had two head coaches now that have had the chance to work at the NCAA division I level after their time with us at NPC. I want to thank Coach Tello for the groundwork he laid here for Nighthawk Soccer. Building a program from the ground up is not easy, and Coach Tello met the challenge head on. I am proud to call him a Nighthawk and more importantly, a friend.”