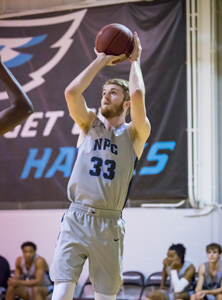 Former Nighthawk men’s basketball player Preston Crowder will never forget his time playing for National Park College (NPC). Not only did it serve as the perfect swan song to his athletic career, but it laid the groundwork that propelled him to his next adventure.

“Coming out of high school, I knew that I wanted to keep playing basketball while staying close to home, Crowder said. “After spending a year at Henderson State University, I transferred to NPC in search of more playing time. I made a lot of friends and a lot of memories during my time there. It was a great fit for me.”

After graduation from NPC, Crowder returned home to Arkadelphia to continue his education at Ouachita Baptist University (OBU).

“After playing two years of college basketball, I got a good taste of it and decided it was the right time to hang it up and focus on my education,” Crowder said. “I had a great time at OBU. I switched my major to mass communication and became really involved in the Ouachita Sports Digital Network, which is a student-led broadcasting network. I announced baseball games, conducted interviews for Tigers basketball and helped run cameras for football and basketball.”

Through his work in sports media, more doors began to open for Crowder, including at his alma mater.

“I was given the opportunity to announce football and basketball for Arkadelphia High School,” Crowder said. I was the play-by-play voice for boys’ and girls’ basketball for two years and provided color commentary for one year with Badgers football. It was a really exciting opportunity for me.”

Having earned a bachelor’s degree in Mass Communication from OBU, Crowder turned his attention to coaching, a childhood dream inspired by the work of his father, coach Garry Crowder.

“Ever since I was five years old, I knew that I wanted to coach,” Crowder said. “My dad coached for 40 years at Bradley, Jessieville and OBU and retired as the all-time winningest coach in OBU women’s basketball history. Seeing my dad do it for all of my life, I always thought that it was really cool to be able to run a basketball team as a job. Even though it’s hard work, I love the idea of competing and being part of a team. Becoming a coach was a no-brainer for me.”

Crowder’s first coaching foray landed him back in Hot Springs, where he served as head coach of the eighth and ninth grade girls’ basketball teams at Lakeside High School as well as assistant high school track and field coach for the Rams.

“This past year was awesome,” Crowder said. “Although there was a bit of a learning curve, I had the time of my life at Lakeside. The program has a lot of talent and will be good for years to come.”

This fall, Crowder’s journey takes him back to where it all started—Arkadelphia High School, where he will teach physical education while serving as the head coach of eighth and ninth grade boys’ basketball.

“The saying around Arkadelphia is ‘once a Badger, always a Badger,’” Crowder said. “It’s 100-percent true. Being invested as a player, then as a media member and now as a coach is really exciting. I love this school and this program and I am super excited to be back.”

As he prepares for the next step in his coaching career, Crowder reflects on the path that led him to where he is today.

“College basketball taught me hard work, discipline and how to play smart,” Crowder said. “[NPC Athletic Director] Jason Hudnell and [NPC men’s basketball head coach] Dillon Hargrove taught me a lot about the X’s and O’s of the game as well as being a good person. All of those things helped me become a better person and a better coach and I hope that those lessons rub off on my players in the future.”

Crowder hopes that his story will inspire other student-athletes to follow their dreams.

“If you think you need a couple more years to develop your game, I highly recommend junior college basketball,” Crowder said. “Being able to get two more years of playtime will make you better so that when you try to move on to a four-year school, you’ll fit right in.”