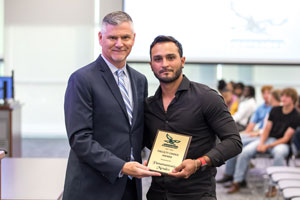 During the event, Nighthawk Athletics recognized athletes, faculty and staff for their outstanding commitment to the College, the athletics program and others.

Dr. George Maxey was recognized with the Faculty MVP award for his commitment to challenging NPC student athletes in his classroom and for his support from the stands.