The National Park College (NPC) Nighthawks men’s and women’s soccer teams were defeated by Northern Oklahoma College-Tonkawa (Tonkawa, OK) Sunday, with the women falling to the No. 16-ranked Lady Mavericks, 9-0, and the men dropping a 6-0 decision to the No. 13-ranked Mavericks. 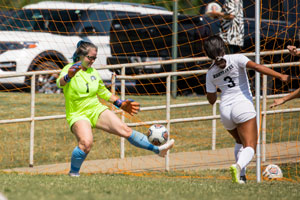 In women’s soccer action, the Lady Mavericks took an early lead on a penalty kick at the seven-minute mark. With NPC (1-5) unable to respond, offensively, NOC-Tonkawa continued to press, adding four more goals to take a 5-0 lead after 45 minutes.

Despite three shot attempts in the second half, NPC was unable to break through the Lady Mavericks’ tough defense. NOC-Tonkawa added four more goals throughout the period to send NPC to its second-consecutive loss.

NPC freshman Brooklyn Mize (Godley, TX) amassed 19 saves in the loss and continues to lead the NJCAA Region II with 90 saves this season.

In men’s action, NPC (0-4) went toe-to-toe with the Mavericks, defensively, for most of the first half until NOC-Tonkawa found the corner of the goal at the 27-minute mark to take the lead. The Mavericks continued their momentum, scoring two additional goals over the next 10 minutes, resulting in a 3-0 halftime lead. 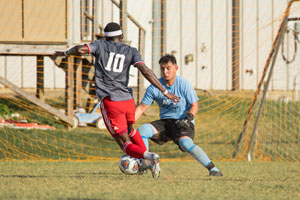 The Mavericks scored quickly to open the second half, knocking in a corner kick to increase their lead. NPC struggled to find an answer throughout the period and was held without a shot attempt over the final 45 minutes, while NOC-Tonkawa added two more goals to secure the victory.

The Nighthawk men and women face UA Rich Mountain Thursday in Mena. The women kick off at 12 p.m. with the men following at 2 p.m.