The National Park College (NPC) Nighthawk men’s and women’s basketball teams concluded their seasons with first-round losses in the NJCAA Region II tournament, with the Nighthawk women falling to University of Arkansas Cossatot, 62-55, on Friday and the Nighthawk men dropping to North Arkansas College, 86-82, on Saturday. 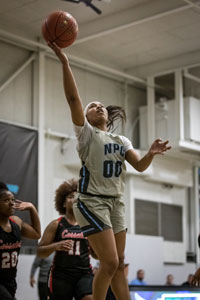 In women’s action, NPC fell behind early struggling to make shots in the paint while faltering, defensively, from beyond the arc. Trailing, 20-10, after 10 minutes, the Nighthawks attempted to chip away at the deficit behind a five-point second-quarter effort from freshman India Atkins (Bryant). However, the Lady Colts continued to thrive from three-point range and the free throw line to build a 33-20 halftime lead.

In the second half, the Lady Colts appeared to pull away, leading by as many as 20 points, 51-31, with 2:26 remaining in the third quarter. With four third-quarter three pointers, including two from Atkins, NPC cut the deficit to 17 points, 55-38, entering the final frame. In the fourth quarter, the Nighthawk women erupted to a 8-0 start, bringing the game within nine points. With one minute remaining, NPC added a layup to bring the game within seven points, 62-55, but could not complete the comeback, ending the team’s season.

Atkins led the Nighthawks in scoring with 18 points in the loss.

On Saturday, the Nighthawk men went toe-to-toe with North Arkansas College for the majority of the first half, fueled by fearless 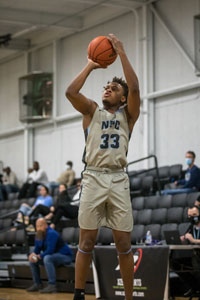 Over the final 20 minutes, NPC stuck to the same game plan, capitalizing on North Arkansas College foul trouble to shoot 16-of-18 from the free throw line while sprinkling in timely three pointers and field goals to keep pace with the Pioneers. Led by 12 points from sophomore Sayvon Traylor (Conyers, GA), NPC matched North Arkansas College down to the wire. Trailing, 84-82, with 0.6 seconds remaining, the Pioneers hit two free throws to ice the game and end NPC’s season.

Valrie led the Nighthawks in scoring with 19 points. Traylor and Anderson finished with 15 and 12 points, respectively, while Powell added 11 points in the loss.

For more information on schedules, rosters and more, visit np.edu/basketball. Visit Nighthawk Men stats and Nighthawk Women stats for up-to-date NJCAA statistics on the Nighthawks this season. Fans can also follow the Nighthawks on social media.