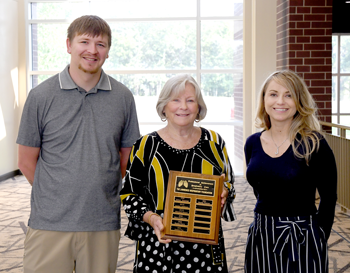 Fox chose NPC because it is close to home. She is a working mom and said choosing a program that allowed her to remain in the community was a priority. “NPC has a good respiratory program, so there is no reason to drive somewhere else,” said Fox.

“The Lawrence scholarship means I don’t have to take out more student loans, which mean less debt and less stress. I appreciate the fact that they had a heart to give, and I am thankful to be a recipient,” said Fox.

Warner is married with two children and his family lives in Hot Springs. He and his wife decided NPC would be the best choice so family members could help with their children.

Without the help of federal aid or federal loans, Warner pays out of pocket for his education. “I am honored to get this scholarship. It is going to help me a lot. It will give my wife some relief since she works full-time while I go to school. It will take a burden off of her and for that I am forever grateful,” said Warner.

“NPC is big, but it is small. There are enough of us in the class that we are taught professionally but few enough that we can learn one-on-one,” said Warner.

Aprile Garner, NPC assistant professor of mathematics, said, “When Dustin took College Algebra, he revealed to me that math has always been a challenge. However, his goal to become a respiratory therapist motivated him to a growth mindset and he was able to master the objectives presented in the course. I have no doubt that he will make positive contributions to his profession. NPC can be proud of a bright, hard-working student like Dustin and this honor is well deserved.”

“Make sure your heart is in this job, if you are in it for the money, you won’t enjoy it,” said Warner.

After speaking with Lawrence Foundation president, Gretchen Lawrence, Fox and Warner both said they understood the importance of helping the next generation of respiratory students and plan to pay if forward by establishing a scholarship for future students after they graduate.