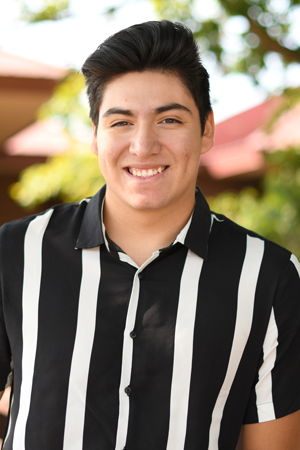 National Park College (NPC) student Juan Hernandez was awarded the Ray and Willodene Donathan scholarship. He is seeking an Associate of Science in Business degree. Hernandez plans to become a pharmaceutical marketer.

The Ray and Willodene Donathan Scholarship was established to celebrate the passion the Donathans had for NPC. Ray and Willodene Donathan believed strongly in the value of an education for improving the lives of students. Mr. Donathan was elected to the Board of Trustees for Garland County Community College, now NPC, in 1976, where he served for 40 years. After Mr. Donathan died, his family wanted to continue his legacy and commitment to NPC by establishing a scholarship for business students.

The scholarship is available to students with a minimum of grade point average of 2.75, enrolled in at least 12 credit hours and have declared a business degree. Preference is also given based on need.

“I chose NPC because it had a very cheerful and outgoing environment and I was able to stay close to home, as well as be able to seek and obtain a degree at a very reasonable price,” said Hernadez. “NPC is more than just an acronym for me, it's a safe place. A big family of teachers and students and everyone wants one another to succeed. NPC for me means success.”

“Juan Hernandez was a pleasure to have in my World Lit I class. While I was unable to meet him in person due to the online nature of the course, in our correspondence he was always very polite and friendly. Juan has a positive attitude and is sincere about his education. He will go far,” stated Nannette Crane-Post, professor of English.

Roger Fox, dean of Communication and Arts said, “Juan was an exemplary student of mine. He attended all classes, came prepared, worked ahead of schedule on assignments and submitted them in full and on time. He was always polite, respectful, and a leader among his peers. He is most deserving of the Ray and Willodene Donathan scholarship. They would be proud of his accomplishments thus far as well as what his future promises in further success.”

“I really want to thank the scholarship donor for allowing me to be blessed and receive this scholarship,” said Hernandez. “This really means a lot to me and my family, because even though I pay for most of my studies, my parents always try to help out as much as they can. I am very grateful for that. Because of this scholarship, they are able to worry less.”