Gobel attended NPC through concurrent credit offerings allowed by her high school. This provided her the experience of college and a jump-start on her secondary education.

“The environment at NPC was great and I was able to learn a lot," said Gobel. "It gave me the ability to really figure out what path I wanted to take for my future."

Gobel became interested in the Medical Lab Technician program and hopes to use her degree to not only serve her community but to fulfill her passion for helping others.

Dr. Rebekah Robinette, associate professor of biological sciences, said, “I had the pleasure of having Jessica in both my Microbiology and Anatomy & Physiology II courses this spring term. Jessica was so studious and excited to tackle Microbiology labs. It has been a while since I encountered a student with such a desire to learn. In fact, it was nearly a month into the term when I learned that she was actually a high school student from Mountain Pine! This was even more extraordinary! Jessica also was elected as an officer of our campus PTK chapter this spring. She is already hard at work with the team on their projects. She provides insightful points of view and is a great team player. To my knowledge, she is the first high school student to serve as an officer in our chapter."

Hendrix wanted to work harder in high school to jump-start her college life and career. When she had the opportunity to attend NPC at no cost, she could not find any reason not to participate.

Coming from a family that did not have much opportunity to attend college, she challenged herself to achieve her goals. “I don’t come from a lot, but that doesn’t mean I won’t be anything,” stated Hendrix.

Hendrix is pursuing a communication, broadcasting degree, and plans to work in radio or as a TV host.

“A college education is important," she said. "You need it for your job, but it also shows that you can work hard and that you are dedicated, possess perseverance and the ability to get the job completed. Furthermore, never believe that you are not smart enough to go to college or get your degree. It is all about working hard and putting forth the effort to achieve your goal."

Carol Gray, adjunct professor for social sciences, said, “Alina is such a hard worker. She is very focused on accomplishing her goals. I know that she works because I would often be served by her at her job. Until I was asked to provide a quote for this, I didn’t realize that she was also getting both of her degrees at the same time. I have enjoyed getting to know her as she has spent time on campus. She will become very successful in her endeavors; I am very certain!”

Lyle decided to pursue his associate degree to obtain high school and college credit at the same time through the Lakeside Legacy Program, which offers classes at NPC at no cost to the student. Lyle is the first graduate of the Legacy program.

“Obtaining 69 hours of credits at National Park College has allowed me to get a jump-start on my bachelor's degree by saving a lot of time and money," Lyle said. "I chose National Park College because of the number of diverse courses available, as well as their partnership with Lakeside. I have taken a few in-person courses at the college, and I can say that I have enjoyed the campus, college professors and the staff."

Lyle plans to continue his studies in computer science at the College of Engineering at the University of Arkansas. 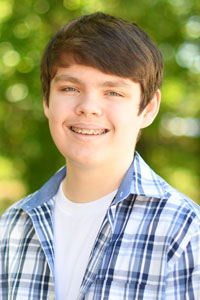 “I give my thanks to everyone who has worked with me at both Lakeside High School and National Park College to make this achievement possible," Lyle said. "With all of the help and support I was given; I was motivated to become the first person from Lakeside High School to finally achieve an associate degree through the Legacy Program."

“I had the pleasure of having Jordan in my Beginning Spanish I Class at NPC," said Lorenia LiMandri, Spanish instructor at Lake Hamilton and NPC. "Jordan is an extremely bright, caring, responsible and mature young man. Jordan never procrastinated; he turned in all assignments on time. He was prepared for tests and quizzes. Jordan loves the Hispanic culture and is eager to continue learning this beautiful language. Jordan will succeed in his new journey, and he will be a successful professional in the near future."

“I had the pleasure of teaching Jordan in Pre-Calculus and AP Calculus at Lakeside," said Julie Wade, mathematics instructor at both Lakeside High School and NPC. "I then had him as a student in my Calculus 2 class at National Park College. He is a dedicated, hardworking student who not only wanted a fantastic grade but also had a desire to fully understand the material. I am so proud of all he has accomplished."