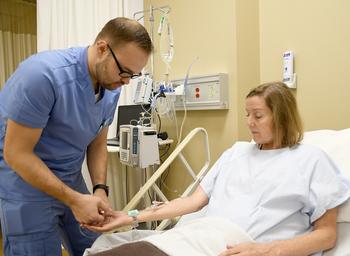 What started as a quality-of-life medical improvement dream is now a reality for two NPC alumni.

Cameron Edds graduated from NPC’s nursing program in 2016 and works as a travel nurse for UAMS in Little Rock. After witnessing frequent problems with IV dislodgement and patient discomfort, Edds started brainstorming ways to make hospital stays easier—not only for the patient, but for everyone involved in the patient’s care.

“Working as a registered nurse, I saw a problem that needed a solution,” Cameron Edds said. “A lot of patients were pulling out their IVs prematurely or having IV dislodgement, which is not only very stressful for the patient and the nurse, but the facility as well.”

Together with his cousin, John Edds, who received his Associate of Arts from NPC and a Bachelor of Arts in Graphic Design from Henderson State University, the two created Edzway LLC, and fashioned the prototype for what would become IVY LOC, an IV tubing securement device that attaches to a patient’s wrist to prevent IV catheter dislodgement and can be safely reused multiple times during a patient’s hospital stay.

“Like all good businesses, we actually started in our garage,” Cameron Edds said. “I knew that I had an idea, but I had very basic computer skills. John was a graphic designer with an impressive portfolio of design work. We started by drilling holes in blocks of wood to get the right diameter for the tubing and John started drawing it up. We had it 3D printed and we started putting the tubing in it and realized that it really worked. Together, we kept improving and printing—close to 20 different designs—until we got to our final variation.”

IVY LOC utilizes a ribbed channel that is specially designed to work with hospital-standard IV tubing. A parallel row of teeth grips the tubing to hold it in place. When stress or force is applied to the tubing, IVY LOC acts as a shock absorber, stabilizing the IV insertion site from inadvertent removal or dislodgement. 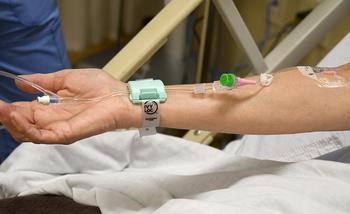 Another problem that IVY LOC solves is the reliance on adhesive tape to secure IV tubing to patients.“The industry standard is adhesive tape,” Cameron Edds said. “It’s not consistent, it can lead to skin tears and even allergic reactions to the adhesive. We wanted to create something secure at the wrist without adhesives.”

Two years after combining their minds and technical expertise, the cousins are ready to apply their revolutionary new technology to the world. With IVY LOC’s utility patent-pending, the Edzway team is excited for the product’s potential on a larger scale.

“We just started talking to hospitals about running a pilot or trial—offering them free product in return and ongoing discounts on our product if they like the product and want to continue to use it,” Cameron Edds said.

Though the team faced challenges along its journey, both Cameron and John agree that the experience has been rewarding every step of the way.

“If we didn’t try this, we’d always look back and wonder ‘what if?’” Cameron Edds said. “That’s what has kept us going throughout this entire process. We wanted to get this out there because we knew we could help the patients, nurses and facilities.”