National Park College (NPC) recognized International Women’s Day Thursday with a Women of Distinction panel discussion, a scholarship award, and a Walk a Mile in Her Shoes march.

NPC welcomed alumnae Lenora Erickson, Stephanie Rose and Kristy Carter for the Women of Distinction panel. The panelists spoke about their successes and setbacks and how they overcame barriers.

Lenora Erickson was a first-generation college student who graduated from Garland County Community College (GCCC) in 1995. She currently serves as the Executive Director for the Arkansas Board of Examiners in Counseling and Marriage and Family Therapy. She served 10 years in the military and entered college after basic training. She originally wanted to be a medical records transcriptionist. Her advisor, Roger Fox, encouraged her to think “one-step bigger.” She was inspired to become a psychologist after taking a psychology class. She knew it would require more years of school, but she thought of Fox’s advice to think just “one-step bigger.” She said, “Don’t get overwhelmed with the big picture. Just do one more little step.” Erickson encouraged students to be organized and on time and said those qualities have opened many doors for her.

Stephanie Rose graduated in 2006 and is an assistant professor at the University of Central Arkansas in the Addiction Studies program. Rose is the oldest of six children. Both her parents held technical degrees and encouraged her to pursue a technical degree in nursing. Rose knew she did not want to be a nurse. She always had a desire to be a social worker. “Roger Fox was the first person in my life to tell me I was capable of going beyond,” stated Rose. When she applied for her bachelor's degree program, Fox encouraged her not to stop. She also praised the tutors who were always there to help her when she needed it. Rose encouraged students to ask for help when they need it, and said her relationships were one of the most important resources she had. “Never burn bridges. Build relationships and keep those relationships,” she said. 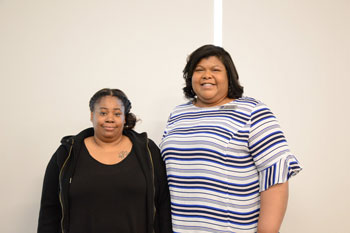 Kristy Carter began her educational journey at Quapaw Technical Institute (QTI) as an accounting student. She chose to continue her education and completed her associate degree at GCCC. She then transferred to Henderson State University to complete a bachelor’s degree in business, and earned her master’s degree from the University of Arkansas Little Rock. She is currently pursuing her Ph.D. in leadership. Carter started college as a single mother. She used the child care services offered at QTI to be able to attend classes and persist through her educational journey. “It is always great to have a strong support system,” said Carter. She reached out and found the support she needed and she encouraged other students to do the same. “It is okay to seek help,” Carter said. She encouraged students to find a mentor as well.

Carter said the new buildings and the leadership of Dr. John Hogan motivated her to give back. She believes it is her obligation to give back to the community that has offered her so much support, so she established the Kristy Carter Scholarship fund. She wants to use her gifts to elevate other women of color who have overcome obstacles while pursuing higher education.

Carter awarded the first scholarship to Shaunte Betts during the event. Betts a student in the Radiologic Technology program. She is a wife, a mother of eight, and maintains a 3.6 GPA. She is the first person in her family to complete high school and attend college. Betts expressed her appreciation for the award and hopes to be able to give back in the future to support another student.

Following the panel discussion and the scholarship award, the Walk a Mile in Her Shoes march featured male faculty, staff and students from a variety of areas on campus who wore red high-heeled shoes. The march takes place on college and university campuses around the country through the months of March and April annually. The march is a playful way to increase awareness for serious women’s issues, including sexualized violence against women.