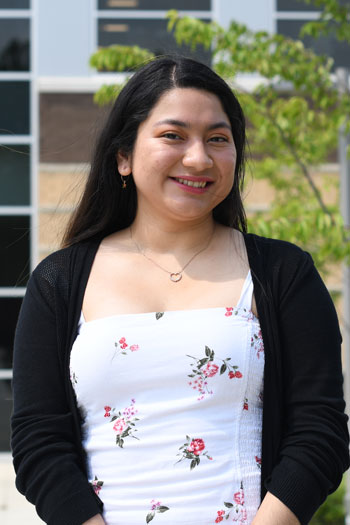 Ramos has completed her first year in the Registered Nursing program and has been a student at NPC since the fall of 2018. She said she chose nursing to help patients, especially those with a language barrier.

“I’m bilingual in Spanish,” Ramos explained. “I know the Hispanics in Hot Springs don’t always go to clinics because they can’t speak English and there are no translators. I’ve been translating for my parents since I was five years old. I still go to doctor appointments and translate for them. I want to help everyone, especially those with a language barrier because I know the struggle and it gave me one more reason to become a nurse.”

Ramos said she chose NPC after researching nursing programs near Glenwood, where she lives. “I found that NPC has one of the best nursing programs and it’s important to me to graduate from a good program.”

After she graduates from NPC, Ramos plans to continue her education by transferring to Henderson State University and obtain her Bachelor of Science in Nursing. She will begin dual enrollment this fall.

The ACC Academic All-Star Scholarship is awarded annually to students from each of the two-year colleges in Arkansas as recognition of their academic and service achievements. Recipients must have a cumulative grade point average of 3.25, be involved on campus and in the community, and plan to transfer to a four-year university in Arkansas.

Laury began in the nursing program in August 2019 and has been a very respectful and polite nursing student. When asked, Karen Parker, a clinical nursing faculty member stated, “Laury Ramos is a very good clinical student. She is quiet, but engages with her patients.” Another faculty stated, “Laury is very caring, professional, and respectful toward her patients, faculty, and staff. Laury is deserving of the ACC Academic All-Star Award and will represent National Park College in her future endeavors.”