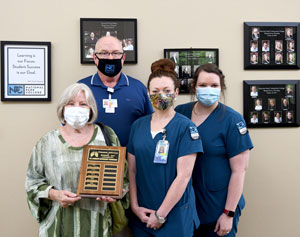 The award is a $1,800 scholarship established to support senior students in the Respiratory Therapy program. Scholarship recipients are required to have a minimum 3.0 GPA and participate in an interview in addition to an essay and application.

Lawrence Foundation President, Gretchen Lawrence presented the awards to an audience of Respiratory Therapy students during the program orientation July 16. Lawrence said, “We established the foundation in 2018 because we wanted to support not only respiratory therapy, but National Park College and Hot Springs where we have lived since 2012.” The foundation has awarded five scholarships since it was established.

Furgerson is a graduate of Sheridan High School and said she has loved her experience at NPC. “I love National Park. It has been a good college,” she said. She said this scholarship will allow her to spend more time with her children. “I can focus on my studies and not have to try to add work as much into it.”

She plans to transfer to the University of Arkansas for Medical Sciences after completing the program to complete her bachelor’s degree and hopes to continue on to medical school. “I am just very thankful to have this opportunity and to have a moment to where I can take a breath and focus on my studies without having to worry about extra income,” she added.

Perry is a graduate of Mountain Pine High School. She transferred to NPC after attending another university and said coming to NPC allowed her to stay close to her family and take care of her mother. “The class sizes are so much smaller. It’s been a lot more for me and more like family than the huge stadium classrooms.”

“A lot of financial burden is lifted. I pay out of pocket. Right now, so I can focus on school, just my husband works, so it’s going to be a big relief,” said Perry. She plans to complete her bachelor’s degree after graduation and hopes to pursue telemedicine.