After falling behind, 7-2, to begin the game, NPC was forced to play catch-up for the majority of the first quarter. Throughout the first act, the Nighthawks struggled to defend Williams Baptist University from three-point range, but battled back with the help of an eight-point effort from freshman Nya Moody (Lake Hamilton).

Trailing, 18-17, entering the second quarter, the Nighthawks spread the offense among five shooters, led by four points from freshman Imani Honey (Hot Springs), to trail, 33-30, at the break. 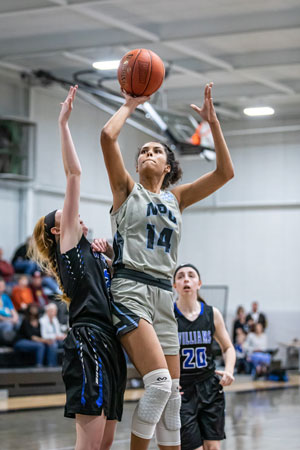 Eight third-quarter points from freshman Nya Moody (Lake Hamilton) helped NPC maintain its pace in the second half. With 4:34 remaining in the third quarter, NPC took its first lead of the ballgame via a free throw from Honey.

In the final act, NPC pushed ahead, erupting for 27 fourth-quarter points to take the lead for good. Sophomore Grace

Crawford (South Side Bee Branch) led the surge with 11 points in the quarter, including three treys.

Moody led the Nighthawks in scoring with 25 points. Crawford added 21 points with 12 rebounds, while Honey scored 11 points in the win.

In men’s action, after NPC scored the opening bucket, the Nighthawks fell behind quickly, with Williams Baptist University exploding on a 13-0 run behind multiple three-pointers to take an 11-point lead with 16:24 remaining in the first half.

Nighthawk freshman Joe Ramey (El Dorado) came off the bench to stop the bleeding, assisting the Nighthawk comeback with an impressive 25-point effort to tie the game with less than five minutes to play in the half. NPC would continue its impressive run with the help of freshman Kamryn Vick (Little Rock), who contributed 15 first-half points, to give NPC a 49-41 advantage at halftime.

Behind Ramey and freshman Terry Clardy Jr. (Conway), the Nighthawks stayed hot in the second half, extending the lead to double digits on a dunk by Clardy Jr. with 17:49 to play. With NPC leading by as many as 18 points with 13:40 remaining, the Eagles fueled a comeback with hot three-point shooting, cutting the deficit to three points, 68-65, with 8:15 to play. Facing adversity, the Nighthawk men rose to the challenge, outscoring the Eagles, 26-10, to close out the game with a win.

Ramey led the Nighthawks in scoring with 35 points. Vick and sophomore David Jagers (Mayflower) added 22 and 16 points, respectively, while Clardy Jr. scored 11 points in the win.

Nighthawks basketball travels to Arkansas Baptist College Thursday, Feb. 13. The Nighthawk women tip off at 5 p.m. with the men following at 7 p.m.