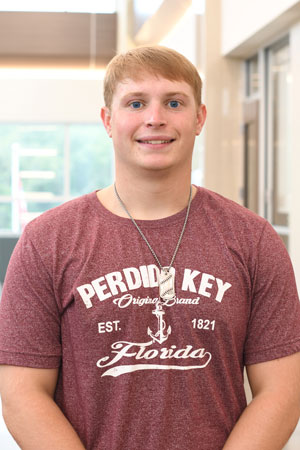 McKim is currently in his first semester at NPC where he is focusing on his core classes and plans to transfer to a university. He has not yet chosen a career path, but says he is excited about spending this time discovering his options. McKim is proud to be part of the Nighthawk baseball team and actively helps his dad coach youth baseball.

Sheri LaDuke, Ph.D. said, “In the short time I have had James as a student, he seems eager to learn and put in the effort for his college education. He was engaging in course content before the class officially started and asked questions to make sure he was on the right track. In addition, he makes a point to sit at the front of the class. I look forward to having him in class for the rest of the semester.”

When choosing what to do after high school McKim was drawn to NPC because “It felt like home,” he said. NPC offered him a place that was close to home and his family.

“The scholarship will help me with the cost of the dorm,” McKim stated. He has found that the bond he is able to create with his teachers and other students is a benefit that helped with the transition between home and campus living. “Thank you, NPC, for allowing me to come here,” expressed McKim.