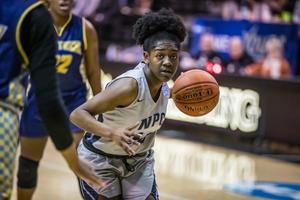 Honey led the Nighthawks in scoring this season with 18.5 points per game, including a team-leading 37.5-percent record from three-point range. Honey also led the region with 9.9 rebounds per game while contributing team highs in assists (5.0 per game) and steals (0.9 per game). Honey’s efforts this season also earned her NJCAA Division II All-Region first team honors while also being named the All-Region MVP.

“This is a great honor,” NPC head coach Marvin Moody said. “Imani is a phenomenal player who has found success at every level of her career—from championships and MVPs in high school to All-Region first team, MVP and All-American third team honors in college. She is the only student athlete from Arkansas to be named an NJCAA All-American and that’s special. I enjoy having her as a part of our program.”

“Nighthawk Nation is incredibly proud of Imani,” NPC Athletic Director Jason Hudnell said. “It is fitting that the first Nighthawk to be named an All-American is a hometown product. She is very deserving, and we are proud she has been recognized nationally.”

NPC finished the 2019-2020 season 11-10 with an appearance in the NJCAA Division II Region II tournament semifinals in March.