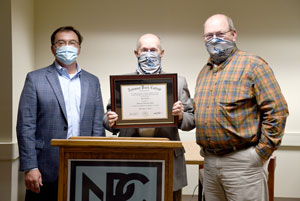 National Park College (NPC) recognized Trustee Don Harris Wednesday during the regular monthly board meeting. This was the last board meeting for Harris, whose term ends this month. Dr. Rhonda Harrington was elected to fill Harris’ seat on the Board beginning in January.

Harris joined Garland County Community College (GCCC) as an original staff member in 1973 and served for 14 years. He was elected to the NPC Board of Trustees in 1997 and has supported the tenure of four college presidents. He was president of the Board for five years during the merger with Quapaw Technical Institute (QTI). He also served as a member of the Rotary Club for 25 years and the Abilities Unlimited Board for 45 years.

Harris was born and raised in Hot Springs, Arkansas. He graduated from Hot Springs High School before earning his B.S.E. from Henderson State University and his M.S.E. from the University of Arkansas. He served five years in the United States Marine Corp and later taught school in Mountain Pine, Arkansas. He also served as Assistant Superintendent for Hot Springs School District. He currently works as a real estate investor and owner of the D.H. Realty Co., Harris Auction Co., and Harris Appraisals. 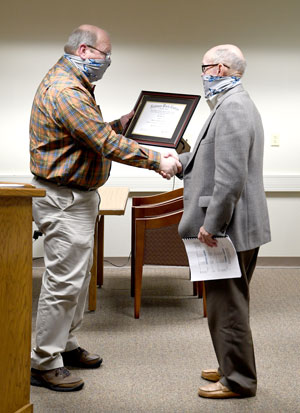 Harris has been married to Sarah Harris for over 60 years. Together they have two children, three grandchildren and six great grandchildren. They are members of Grand Avenue Methodist Church.

The Board honored Harris by presenting him with an honorary Associate of Arts degree from National Park College.

Trustee Jim Hale said, “This is a bittersweet day. I can’t think of a single person who has had a bigger impact on this campus than Don Harris. Don has been a champion. Don has been a cheerleader. The community looks to Don Harris for the protection of their tax dollars.”

Harris reminisced about his time at NPC as a staff member and about his experience during the merger of GCCC and QTI. He said, “I have been honored to serve with each and every one of you,” and added “thanks for the memories.”

John Hogan concluded the remarks noting Harris’ determination to put student success at the center of his efforts and his significant role in the financial stewardship of NPC through his position as chair of the budget and finance committee, a seat he has held for many years. “We’re going to try today to say thanks for his tireless efforts, his vigilant stewardship, and his unfailing passion to do what is best for NPC students,” said Hogan.

Hogan credited Harris for his work to put NPC in the best possible position of sustainability going forward and noted NPC would not hold such a strong financial position without his leadership. “Don was the perfect partner with which to engage on these matters. He cares deeply about our students, employees, and mission. He understands the streams of state funding and the complexity of other revenue streams,” he added.