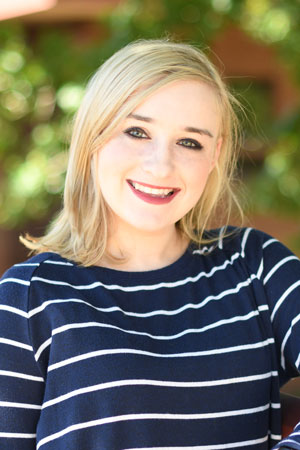 National Park College (NPC) student BreAnn Terry was recently awarded the Dr. Kenneth Cook English scholarship. She is completing her Associate of Science in Education with a focus on middle-level education in language arts and social studies.

After graduating high school, Terry enrolled in Beauty College but felt stuck in her career. Terry has always had a passion for education and wanted to pursue her own education.

Dr. Tamara St. Marthe, NPC Speech Communication faculty, said, “BreAnn Terry was a wonderful student. She lit up my classroom with her smile and positive attitude. She was dedicated to her academic success. She was professional and bright. She was always fully engaged in classroom discussions and her contributions were timed and meaningful. It was an absolute joy to watch her develop her public speaking skills over the course of the semester. Her scholarship is well deserved.”

Terry said she heard great things about NPC, and the low cost was a factor in her decision to enroll. She soon realized that NPC is a community where students feel like family, the staff and faculty are helpful and cater to the students, and student involvement is encouraged.

“I was surprised when I received the scholarship. I now have more peace of mind when it comes to paying for my books and my supplies. I am extremely grateful,” stated Terry.

“BreAnn Terry is most deserving of the Ken Cook English Scholarship. Ken would be pleased with BreAnn being selected for this award, and because she is a former student of mine, I can attest to her deservedness and speak for him at the same time. BreAnn’s work ethic is to be admired, her seriousness and preparation for all classes and assignments are to be commended, and her love for literature and composition deserve the accolade. What’s more, Ms. Terry is willing to learn and works diligently at improving her writing, critical analysis, and research skills. BreAnn delights in reading and discussing literature, and her vibrant presence was always felt when she was in class. I am proud of her determination and her academic endeavors and look forward to hearing of her successes when she starts her career,” stated NPC Communications and Arts Division Chair, Roger Fox.