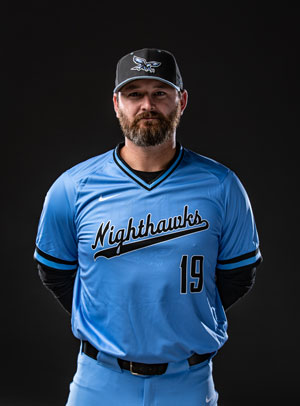 “I’m extremely honored and excited to bring high-level baseball back to Hot Springs,” Thompson said. “This is an amazing opportunity to build on what Coach Hargrove set in place in our previous season. National Park College will be the premier baseball program in our state.”

“I could not be more excited about the addition of Coach Rich Thompson to our NPC Athletics staff,” NPC Athletic Director Jason Hudnell said. “When the head baseball job became vacant late in the spring, Coach Thompson was the first call I made. He served as the assistant head coach working with our pitchers and catchers during our COVID-19-shortened 2020 season. He quickly built a rapport with our young men and they were very excited when I informed them that Coach Thompson would be their next head coach. Coach Thompson brings a wealth of knowledge and experience at all levels that will no doubt benefit our program. Coach Thompson and I share the same vision of not only winning championships but also preparing young men both on and off the field. I look forward to working alongside him as we continue to build a championship level baseball program.”

Thompson brings an impressive resume to NPC. A native of Australia, Thompson played for the Australian National team for 12 years, including two World Baseball Classics, two International Baseball World Cups and a silver medal in the 2004 Olympics. Thompson also played Major League Baseball for six seasons with the Los Angeles Angels, Oakland Athletics and Toronto Blue Jays and was named to the 2011 MLB postseason All-Star team.

Thompson lives in Hot Springs with his wife, Ashley, his son, Alfie, and his daughter, Livie, serves as a volunteer committee member of the Majestic Park project and owns The Practice Field baseball training facility in Hot Springs.

For more information on schedules, rosters and more, visit Nighthawks Baseball online. Fans can also follow the Nighthawks all season on social media.