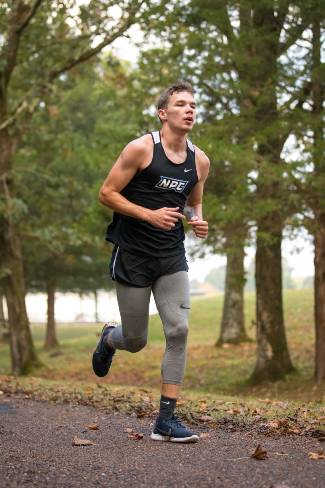 Payton Hayes didn’t always love running. Once he hit his stride, however, the Nighthawk sophomore learned that nothing could stop him. “When I was in high school, I never liked running, but my coaches always encouraged me to look into it,” Hayes said. “I joined the track team and I liked it ok, but I always felt like I wanted more. When I came to NPC, Coach Hudnell encouraged me to run cross country for him. I had never done it before, but now that I’ve gotten into it, I can’t get enough of it now.”

One of six cross country athletes running for NPC this year, Hayes is committed to putting the Nighthawks on the map this season. “This season has gone much better than expected,” Hayes said. “Coming into cross country, I wasn’t sure that I was going to be good. In high school, I was a sprinter—not a long-distance runner. I wasn’t sure how to prepare to compete against all these other guys that have trained for cross country all their lives. I just wanted to come in, compete and represent NPC in a positive way. I’m steadily improving each week, Coach Hudnell is loving my progress and I just want to continue getting better.” “Payton has stepped in and provided tremendous leadership for our team,” NPC Athletic Director and Cross Country coach Jason hudnell said. “As a first-year runner it seems like he gets faster each morning we run. It has been fun to watch him grow.”

Despite never running cross country before, it didn’t take long for the sophomore to get acclimated to the change of pace.

“In cross country, the competition is a lot faster,” Hayes said. “I learned quickly that if you don’t put in the time to help yourself get better, you won’t be able to compete at this level. I remember being very nervous before our first meet. I wanted to represent NPC in the right way, and I was so scared that I wouldn’t do well. When I finished the race, I did a lot better than expected. It was an enjoyable time and a great bonding experience with the team.”

This weekend, Hayes and the Nighthawks will face their biggest challenge yet—the NJCAA Region II championship in Mena.

“We’re racing in Mena, which was the same site as our most recent meet,” Hayes said. “We know the track and feel confident about our odds. We’re expecting to go head-to-head with some very good runners. We have been running three-to-four times a week to prepare, but we’re also working to be mentally prepared for the event, which is just as important. Coach Hudnell believes that we can make some noise and do good things this year. We have to keep working hard without letting up.”

Despite suffering a knee injury in high school, Hayes didn’t allow adversity to slow him down.

“In high school, I injured my knee playing basketball,” Hayes said. “It was originally supposed to be a small surgery, but it ended up being much more. My doctors told me that I might not be able to run or compete at a high level anymore. I had a hard time walking and functioning, but I told myself that I wasn’t going to allow that to happen. It took me a full year to work myself back into shape. I’m still not 100-percent today, but I’m much better than I was and I’m glad that I can compete at a high level again.”

Hayes’ progress with the program has inspired him to continue training as much as possible. “Cross Country has made me fall in love with running again,” Hayes said. “I actually like to run recreationally now. I’ll jog around the block or at the gym and play basketball with the guys for cardio. Anytime I have free time, I try to get a run it. I love it.” Training and competing during a global pandemic has brought its share of challenges to Hayes and the Nighthawks this season.

“COVID-19 has affected us big time,” Hayes said. “At first, we weren’t even going to compete this fall. We didn’t start running as a team until about a month ago. We normally would have started long before that. When we found out that we would be competing in regionals this fall, we started training immediately and haven’t stopped since. It’s been crazy.”

When he’s not running for the Nighthawks, Hayes volunteers for First NLR Assembly of God in North Little Rock. In the classroom, the sophomore is pursuing a degree in criminal justice.

“I like helping people,” Hayes said. “Law enforcement needs help and I want to step up and give back to my community to help them out.”

A Hot Springs Native, Hayes’ decision to attend NPC was a no-brainer.

“When choosing where to go to college, I knew that I didn’t want to be far from home,” Hayes said. “NPC was close to home, affordable and I heard great things about its criminal justice program. After one year here, I told myself that I should have come here sooner. I love this place. It feels like home.”