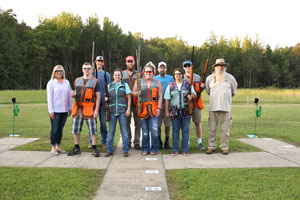 Trap shooting team coach James Montgomery said the team may consider joining a conference after the first year. The team is currently working on fundamentals and improving scores to prepare for their first competition later this fall against Southern Arkansas University. Montgomery said they plan to schedule matches or exhibition shoots with other area colleges as they progress.

The College provides the training and equipment. Team members are required to complete an Arkansas Hunter’s Education Course. Montgomery said safety is a top priority for the team. “We’ll provide training for any shooters who do not already have that certification. We pick a different fundamental, such as safety, pace, rotation of shooters, stance, or sighting to focus on each week. We always have a safety briefing before taking our shotguns on the range,” he said. “We require hearing protection and eye protection for all personnel prior to entering the range area. We are proud to have been to the range numerous times without any safety violations.”

The National Rifle Association Foundation awarded NPC a grant for five shotguns, 14 cases of shotgun shells, and funds to purchase clay pigeon targets. Arego’s Guns supported the team by waiving the FFL fees for receiving the shotguns. The Mountain Valley Sportsman’s Association (MVSA) hosts the team for practice on their trap ranges.

Montgomery expressed his appreciation for the support the team has received to get started. “We have had a lot of support from our campus and the community. I am excited to build on the momentum as our students continue to learn and improve their marksmanship,” he said. “A fierce competition is now underway to gain one of the five places on our starting lineup.”

The team practices each Tuesday at 5:00 p.m. During inclement weather, the team uses a the LaserShot Firearms Simulator in the Criminal Justice classroom with a clay pigeon simulator for additional training.