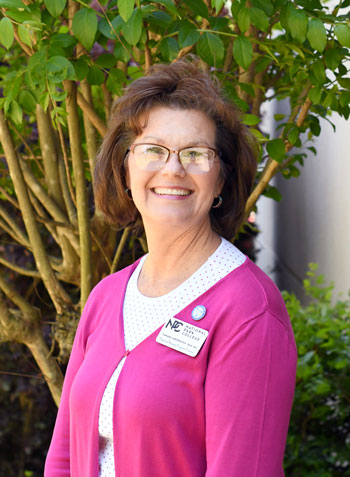 LPN Program Director Tamara Abernathy was recognized as one of the Great 100 Nurses of Arkansas for 2019 at a ceremony in Little Rock April 9.

Abernathy has taught practical nursing classes at National Park College for over 30 years. She has served on numerous committees and nursing organizations including the Education Committee for the Arkansas State Board of Nursing. Abernathy serves as a mentor to PN Program Directors in the state and is active in the PN NANEP group.

Abernathy was not expecting the recognition letter when it arrived. “I went, ‘oh my gosh!’ Tears came to my eyes,” she said, and Abernathy was especially honored that Janice Ivers, the Dean of Nursing and Health Sciences, had recommended her for the recognition. “That touched me, because to submit these recommendations you have to stop your day and make a conscious effort to submit this. To me, that was equally as important as receiving the award. That was pretty awesome.”

“Tamara has exemplified humanitarian efforts not only in her personal life while serving her church but more specifically in the population of nursing students she serves,” said Ivers. “She is the first one to identify the impoverished and help them with a plan for success. Tamara is fair to all while maintaining unwavering firmness which builds an environment of trust and collegiality.”

Abernathy said the ceremony was interesting “because then you see 99 other men and women, lots of male nurses there, men and women being recognized for their contributions to healthcare. That was an awe moment. Nursing is not one person, nursing is a team, and to be in a room with those peers was pretty awesome. And it lets us know we’re doing some great things. Nursing is hard, you don’t go into it to get a pat on the back. You go into it because you have a love of people.”

According to their website, the Great 100 Nurses Foundation was founded 33 years ago and honors nurses based on their concern for humanity, their contributions to the profession of nursing, and their mentoring of others.

Abernathy will retire from National Park College in June and plans to work part time. “I think that I still have a lot to offer and my love is long term care,” she said. “I have mixed emotions because this has been my focus. I’ve taught for half of my life. I’ve been dedicated to education.”

Ivers noted that Abernathy has contributed to the education of over 1,200 “well-prepared and proud” LPN graduates. “National Park College Division of Nursing could not be prouder of all of her accomplishments during her tenure,” said Ivers. “Her courage, competence and caring certainly sum it all up.”