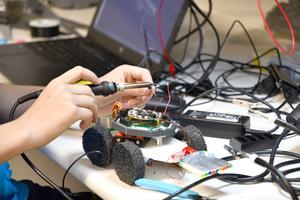 Vice President for Workforce and Strategic Initiatives, Kelli Embry said a key goal for the camps is recruitment. “Our primary goal for camps is to recruit future students and make the campers aware of opportunities and programs that NPC has to offer. It is also to spark their imagination, create an entrepreneurial spirit in them through problem solving activities and team work, to provide hands on learning, and to broaden their knowledge about career opportunities in our region. We are building the next generation of workers, and they will know what NPC has to offer.”

Embry noted that she encountered an NPC student on her way into the building that had attended the first YMA camp at NPC. “It’s my honor to get to do things like this with these young students,” said Embry. She commended her team, all of the volunteers and camp coordinator Pam Castleberry for all of their work to organize the camps.

The camps are made possible through the generosity of sponsors and grant partners. Corporate sponsors included Berry Global and Radius, Inc., and individual sponsors included Dr. Gordon Watts, and Brenda and Lee Richardson. Grant funds from Nuts, Bolts, & Thingamajigs covered the majority of expenses for the YMA camp, which is in its fifth year. The Arkansas Space Grant Consortium provided support for both engineering camps. These funds also provided 24 students with scholarships to attend camps that would not have otherwise been able to attend.