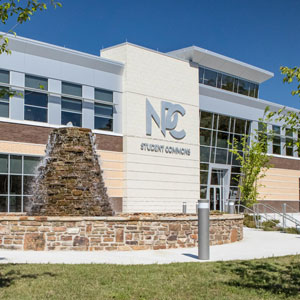 The Greater Hot Springs Chamber of Commerce conducted a ribbon cutting at 11:00 a.m. Students, staff, faculty and guests were invited to participate in a cookout following the ceremony with hamburgers and hotdogs to celebrate.

The NPC Foundation hosted a VIP reception and tour Thursday evening. Rex Nelson provided a keynote address to guests and spoke about the economic potential for our region and how higher education is becoming the next area of growth for Arkansas.

Rex Nelson is one of the most high-profile writers and speakers in the state. As senior editor of the Arkansas Democrat-Gazette, he writes three columns a week and essays for the cover of the newspaper's Sunday Perspective section. He's the author of three books -- the first full-length biography of Hillary Rodham Clinton, a biography of Arkansas educator Ben Elrod and a collection of his essays on Arkansas. He's also the author of a popular blog known as Rex Nelson's Southern Fried and makes regular television and radio appearances.

Nelson served for almost a decade as the policy and communications director for Gov. Mike Huckabee and then served for four years in the administration of President George W. Bush as one of the president's two appointees to the Delta Regional Authority. He has been inducted into the Arkansas Sportscasters and Sportswriters Hall of Fame. In 2016, Gov. Asa Hutchinson and the Arkansas Rural Development Commission named Nelson as its Rural Advocate of the Year for the state of Arkansas.